Are You Expecting Jesus? 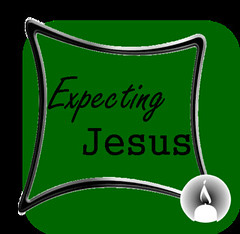 Fast forward several weeks and Christmas is now a few days away. Presents still need to be wrapped, some still need to be purchased and my eyes are frequently fixed on things other than Christ. That little baby born in a quiet manger. No pomp. No circumstance. Well, aside from the amazing multitude of heavenly hosts praising God:

Glory to God in the highest and on earth peace, goodwill toward men!  (Luke 2: 14)

But, somehow the angel who commanded the shepherds to not be afraid has become so familiar to us that we can’t fathom fearing the One whose birth was announced or His heavenly messengers.

We go through life doing our thing like we prepare for Christmas.  Maybe we have good intentions, but the demands of the world are very strong.  School, work, family life…all important, all requiring our full attention now.  The quiet unassuming birth in the manger seems to wait.  Or becomes overshadowed by the noise all around us.

As peaceful and calm as the silent night, the holy night, we must turn off the worldly demands and prepare for the quiet birth of Jesus.  The Word became flesh and dwelt among us!  May we truly behold His glory, the glory of the only begotten of the Father, full of grace and truth.  God-made-human and yet fully God.  Glorious!  There is nothing more demanding of our attention!

While we must fight here on earth to be focused and prepared for the Christ child, there will come a time when no focus is needed because all worldly things will pass away and the triumphant One will make His grand arrival in a manner that is anything but quiet and unassuming.

Now I saw heaven opened, and behold, a white horse.  And He who sat on him was called Faithful and True, and in righteousness He judges and makes war.  His eyes were like a flame of fire, and on His head were many crowns.  He had a name written that no one knew except Himself.  He was clothed with a robe dipped in blood, and His name is called The Word of God.  And the armies in heaven, clothed in fine linen, white and clean, followed Him on white horses.  Now out of His mouth goes a sharp sword, that with it He should strike the nations.  And He Himself will rule them with a rod of iron.  He Himself treads the winepress of the fierceness and wrath of Almighty God.  And He has on His robe and on His thigh a name written:

AND LORD OF LORDS.

There will be no mistake.  There will be no distractions.  The Lord God will come again in full array of His glory.  If you know Him as your Heavenly Father, you will rejoice and worship Him endlessly.

If you do not know Him as Lord and Savior, you will do this:

at the name of Jesus every knee will bow, of those who are in heaven and on earth and under the earth,  and that every tongue will confess that Jesus Christ is Lord, to the glory of God the Father.

There is no escaping the Lord God Omnipotent’s reign.  Everyone falls under His dominion and He will receive the glory and full attention a worthy King deserves.

Give God the glory now.  If you allow other things in your life to be more important, wake up, oh sleeper!  Look to Jesus, who is the author and finisher of your faith, and fight against the lure of your flesh and the world.

If you don’t fear the Lord, wake up!  Don’t be a fool.  No judge in the land will be able to stand before the King of kings for all will be bowing before the One who commands holiness and obedience.  Know that this sovereign Lord is not only to be feared, but loved.  He is so good that He commands, but He also loves.  Stop resisting Him and finding love in all the wrong places…He is the true source of all that is love (1 John 4: 8) and He will fulfill all your needs!

Christmas is here!  Are you expecting Jesus?  He has come and He will come again!

King of kingssecond coming of Christ